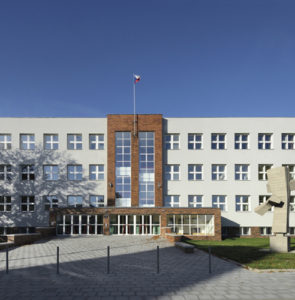 What function did optical telegraph serve? What duties were performed by a track officer? Which towns saw the double-railway stations of Emperor Ferdinand Northern Railway and Imperial-Royal State Railway? Questions like those and more will be answered for little guests, which can also take away a self-made paper model of a railway house. For kids 8+. A guided tour of an exposition about history of the main railway routes for parents and children with Alena Borovcová.

Architecture in services of the First Republic

The birth of Czechoslovakia in October 1918 shaped architecture too. The 20s and 30s of the 20th century represent one of the most noticeable periods in its development. Republican idea permeated the search for a national style and followed efforts for a civil architecture and fulfilling of its social ethos. In the introduction we will deal with international context. A lecture about period architecture in Ostrava region will follow. Apart from the founding personalities such as Jan Kotěra we will be speaking about Josef Gočár, Pavel Janák, Karel Kotas or Lubomír and Čestmír Šlapetas. We’ll mention the main realizations – schools, hospitals, houses, villas, department stores, and factories. The ending part will be focused on successes and losses of heritage institutions regarding architecture of the period. Lecture by Martin Strakoš with a presentation of the exposition.

One of the most distinct features of lifestyle of the First Republic was fashion. Everyone who has ever seen any of the 20s or 30s movies will remember the elegance of the contemporary fashion that couldn’t do without hats, gloves and luxurious handbags. Names of fashion boutiques like Podolská, Rosenbaum or Roubíček, in which the then film stars had their wardrobes tailored, are still famous. We will focus on basic fashion elements, which no lady or gentleman could walk in the streets without, fashion for various times of the day, variations in cuts, shapes, forms and we’ll also talk about the most important fashion boutiques and off-the-rack companies. Special attention will be given to situation in between the World Wars. Lecture by Romana Rosová.

The first steam railway of Hapsburg monarchy, the Emperor Ferdinand Northern Railway, led from Vienna to north, through regions of Morava and Silesia to salt mines near Bochnia in Polish Galicia. The programme of the state railway track was approved in 1841 and was supposed to ensure construction of the most important railway routes in order to connect all Austrian provinces and important ports to Vienna. Imperial-Royal State Railway connected Vienna to Prague and Saxon railroads. The Imperial-Royal State Railway and Emperor Ferdinand Northern Railway became a backbone of the railway network of the Czech Republic. Image materials are supplemented by 3D paper models of constructions by Vladimír Londin. Guided tours of the exposition with Alena Borovcová.